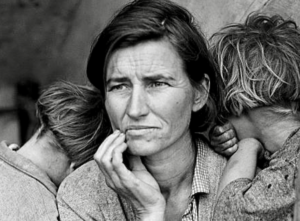 Well-known photo of the depression, 1936.

In 1930, at the beginning of the last great crisis, the earth held only a a mere quarter of today’s inhabitants. The phrase “environmental pollution”, in its current use, was not yet coined, the rainforests were intact, the seas were clean, and people lived within the healthy social structure of the close-knit extended family.

Two-thirds of the population worked in agriculture, which at the time, produced food almost entirely organically. Even without antibiotics and the many chemicals commonly used today, life expectancy was relatively high despite the politically complicated times. Even though the brutality of the Second World War is hard to surpass, people were, at that time, relatively harmless beings in comparison to today’s population in terms of their willingness to resort to violence.

This fact alone will make the catastrophes of the 1930s and early 1940s seem like a walk in the park in relation to what the Western World is soon expecting. According to official figures, around 10% of Europeans were killed at the time. Conversely, it can be reasonably expected that only a tenth of the world’s population will survive the coming crash.

Only very few people who left Europe before 1933 could have guessed what would happen in the years to come, as there was no internet at the time, and, therefore, no possibility to get the necessary information. They did not know whether they would be better off outside Europe than in their own country, which they left behind. At that time, the media served state propaganda and those who spoke a foreign language could not use foreign media as a reliable source of information, since foreign media also served their own purposes. Otherwise, those who had uncles and aunts in foreign countries had better access to valid information, to emigrate and gain a foothold abroad more easily.

Apart from the fact that the USA also suffered from a depression in the early 1930s, those who wanted to emigrate did not have the opportunity to hop across the Atlantic and back, or to look at a piece of land via Skype. Emigration was a jump into the cold water, and, as a rule, there was no turning back once they had left. In addition, hardly anyone had any significant savings, and money, such as precious metals, had to be transported physically. Last but not least, it should also be mentioned that the concept of taking out loans in order to finance a trip was unheard of by the ordinary citizen at the time. Only those who emigrated in the knick of time were not directly affected by the Second World War. 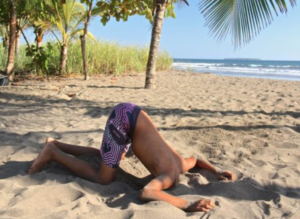 No Vision = No Food!

Today, things have changed more than slightly: the world is hopelessly overpopulated, pollution is indescribable, rainforests are dying, overfished seas are degraded to cesspools and trash dumps, and it is believed that a large proportion of insects have already been destroyed by electrosmog. Only five percent of the population still works in agriculture, organic food is only available at a high surcharge, and 500 nuclear power plants are awaiting the GAU. Realistically speaking, most humans are wearing mind-cuffs, rotating the hamster wheel on their way to the final phase of the debt money system.

Whereas at the beginning of the 20th century there were one billion people on this planet, this number has increased more than sevenfold to the present day. To achieve this, life expectancy had to be significantly extended, child mortality had to be minimized, food production had to be substantially increased, and the exploitation of nature had to be maximized. This was only possible with the ruthless utilization of millions of tons of chemicals such as antibiotics, fertilizers, and so-called pesticides. It was only through these means that more than 7,000,000,000 interest slaves could be kept alive and happily unaware in their service of feeding our debt-based currency behemoth.

As the population increased, so did the evaluation of almost everything, for the higher the demand, the higher the price. This applies in particular to land for the construction of housing and to the production of food. What was clear from the beginning to the system’s designers has only come to light in recent years: neither can the human population be increased indefinitely, nor can the value of land rise endlessly to generate infinite economic “growth” facilitated by infinite loans.

Due to these facts, economic bottlenecks will result, as infinite loans cannot be granted. For this reason, the system is on the verge of collapse today, and, most likely, a culprit will be blamed for initiating the coming crash. Perhaps a volcanic eruption in Iceland or Italy may come to serve as the scapegoat to close the banks. Or perhaps it may be a war in the Middle East, or even a false flag attack similar to September 11th.

After a collapse, mankind’s population is likely to reduce to roughly one billion again, as this is the maximum human population that can be sustained through means of organic food production, on the planet. In other words, only enough food can be produced organically, without the aid of chemical “pesticides” and fertilizers, to feed one in seven people; six out of seven will have to starve. The cold, hard, truth is, that putting your head in the sand today means that you won’t have anything to eat tomorrow.

Until a few years ago, the world was still fine for the majority of its inhabitants – apart from a few blemishes. There was a war here and a coup d’état there, but those who were not directly affected watched, and as a rule, did not ask any questions.

This situation is about to change, because in the future it will no longer be small minorities – far beyond the horizon – on whose backs, and to whose disadvantage, politically and economically motivated crises, conflicts, and wars will be staged and carried out. This time, everyone will be affected: The modern concept of “Play Now and Pay Later” will very soon take its bitter toll, because the crash will be nothing other than the payday on which everyone alive will have to pay their personal debts, the debts of their parents, the debts of their grandparents, and the debts of their neighbors. Then, everyone will passionately ask “Why?”, but the extreme majority of those who did not bother to prepare for the end of the system will not have any answer, and will not receive one from anyone. 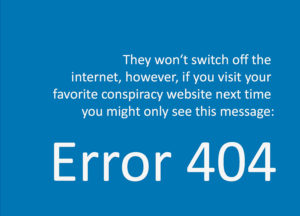 Perhaps a war will be the answer, as is often the case, whereas artificially created external problems are deliberately created in order to divert attention from artificially created internal problems. There may well be civil wars in which the population – or what is left of, it, at least, on that given day – will fight and kill each other. Even the events of the Middle Ages can be repeated today, as diseases that have not been present in the Western World for some time are being reintroduced from Africa: scabies, plague, Ebola, cholera and so on. In fact, it does not really matter how violently the debt society’s energy of unpaid bills will be discharged, because in any case, it must be reckoned that there will be a lot of dust on the day of the crash and that the Western World will be far from the same after this dust has settled. Therefore, the act of securing existential basics in time for such a crash is becoming the focus of attention, since there is not enough “Plan B” to go around for everyone, and the emergency exits will be heavily congested on day X.

The powers that be still manage to calm the minds of the herd, with their bellies full and their minds so easily averted by the omnipresent television set, “Bread and Circuses”, as they were referred to during the fall of Rome. If the situation worsens, however, and the standard of living falls below the limit of what is considered the minimum in a so-called democracy, the introduction of a police state will be next step. This is followed by restrictions: Internet sites are blocked, free speech is forbidden and the army is used as a core means to keep civilians doing what those in power intend them to do and think. For such measures, legislators need reasons that are accepted by the population. In the past, false flag events such as the Reichstag fire and September 11 served as justification for restricting civil rights.

Today You Decide where You will be Tomorrow!