“It can’t get any better” applies primarily to one country: Greece!

Greeks who took their money out of the country in time did exactly the right thing, as most of them now have nothing left to take them out of the country. And those who left the country in time did the right thing, because most of those who stayed in Greece today are no longer able to emigrate. Apart from the fact that this country is now a part of Europe’s poorhouse, it is directly the result of the refugee flows and it is conceivable that Turkey will be involved – and not only in this context. Surrounded by the powder barrels of the Middle East, it doesn’t take much imagination to guess what Greece is about to do: There’s no better way.

In 2010, the Greeks were the only people in Europe to rise up against dictates from Brussels. They demonstrated vigorously and there were a few deaths, but otherwise everything remained the same until today: Pure salamic rash – a little worse every day! In 2010, the Greeks were apparently still strong enough to go out on the streets; today we can read that there are first victims due to the lack of unavailable or priceless medicines. If they had all of a sudden been deprived of what they had to give up within seven years, the revolution would have taken place. It is obviously not a problem to gradually deprive them of their standard of living, since hope is also dying in the south of Europe. As bad as it may be for many people, the country is only in the prelude to the decay of modern cultures. I suspect the majority have not yet understood that.

From this I conclude that an experiment is being conducted with the Greeks to find out what can be expected of a people. The rest of Europe would still have the advantage of learning from this experiment, because Greece is already a great deal further ahead as far as the crisis is concerned. However, instead of recognising that the fault is in the system, the Greeks are blamed for their misery. Probably they themselves believe that it can only be this way.

1994 was a very important year for me. Norbert Blüm promised that the pension would be secure. At least in the small print he should have mentioned at that time how long, for which contributions and in what amount an old-age provision would have been guaranteed. In view of the facts, this quote seems cynical today, because even at that time there were statistics from which demographic developments could be deduced and longer-term conclusions could be drawn. Falling birth rates, a longer life, shorter working hours and higher demands are ultimately the stuff of which the crash is made.

Therefore, Blüm’s assertion must be classified somewhere between highly criminal and traitorous. The fact that my assessment is in no way exaggerated becomes clear to millions of people only when they understand that they have spent decades in piggy banks, which we have slaughtered together for a long time. Blüm of course knew how the system works, but eventually he was paid to lie. Today, 85% of all German voters give their votes to the block parties and continue to attest their own stupidity.

So I turned on my brain in 1994 and started reading. But even with thousands of pages it was not possible to form a well-founded opinion. Too many authors expressed too many opinions and a collapse in the mid-1990s wasn’t really imaginable for me either. It was not until the year 2000, when information was available on the Internet, that I realized that things could not get any better. More than 20 years have passed and it definitely didn’t get any better!

Whoever was born around 1960 is probably one of the main sufferers of a breakdown. On the one hand, the working part of the population has been obliged for decades to pay pension contributions and on the other, many people have been tempted to invest their savings in cap games such as life insurance, government bonds and similar criminal activities. Due to higher returns, most of this money is still going to Greece and other countries to keep these loss-making candidates afloat. After the crash, the maturity of the LV is as illusory as the hope of receiving monthly payments for compulsory state pensions.

Furthermore, baby boomers on day X are no longer the youngest and therefore no longer physically the strongest, but they will have to work until the bitter end if they can and should there be work to thank them for having maintained the Ponzi system for the time of their lives. Many of them do not even have descendants who could contribute to their pensions. Although gold and silver have not gained value since 2011, physical precious metals are the better investment in the long term.

Those born around 1970 were busy planning their future in 1994 and may not have had time to critically examine Blüm’s assertion and other similar questionable statements. In addition, the 1980s and 1990s were at their best, which is why the absolute majority of mistakes were made to draw conclusions about the future from the present. And as already mentioned, there was no access to the truth without access to the Internet.

If I made fun of Norbert at the time, I could never have imagined that it would be him who would change my life. And while he enjoyed the bonus of a comedian with his extreme Hessian accent, it is nevertheless clear that he is still right to this day. Although the means of paying current pensions will continue to be borrowed from future generations, they are still paid on a regular basis. In the meantime Norbert has also revised his opinion, because he is no longer a member of any government and today he is allowed to publicly represent at least part of the truth. As little as his lies of yesterday interest him, his pension – in view of his old age – should be as certain. For young people it looks different.

Whoever was born around 1980 is now at the best age, has already paid a whole lot of pension contributions, but, even if the system did not collapse, could not even count on a minimum pension. At that time, this generation was too young to be able to follow Blüm’s verbal effusions and understand or even question their significance. Apart from that, the future for a teenager also meant “tonight” in 1980 and not retirement provision. While we were all optimistic and the so-called “cold war” was coming to an end, we had no idea that the time shortly before the turn of the millennium was just a transitional period, but that a new enemy would soon be presented to us. Except for a few side war scenes such as Yugoslavia and Rwanda, there was temporary rest at that time. There could not be any talk of “it won’t get any better”. “Keep it up” would have been the motto back then. 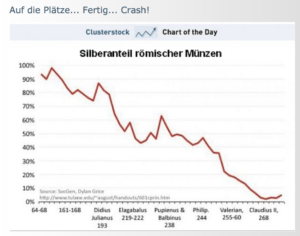 In the year 14 after Norbert’s announcement I finally decided to emigrate. Even a maximum portion of optimism about purpose couldn’t keep me in Berlin. Maybe I made this decision a few years too early, but I had a few years more time to prepare myself. At the latest with the alienation – since mid-2015 – I believe that there can be no turning back; in my opinion, Europe is lost. I am expecting a crash and in this context, the decline in the value of financial investments, forced loans and account closures, falling incomes and higher taxes as well as extreme crime and, ultimately, civil war are to be expected. However, the possibilities of preparing for collapse are limited. There are no “crash certificates”which would still have a value after a collapse and in a deflation precious metals might not offer protection. In industrialised countries, the ownership of a farm is not safe either, because a collapse leads to famine, which threatens to confiscate food-producing businesses. In addition, today’s industrial society is no longer able to feed itself on an organic basis.

Anyone who prefers to stay in Europe should not expect any solution from new parties, because of course they cannot correct the mistakes of past decades. As far as the real problem is concerned – debt and all its consequences – these new parties are not telling the truth either. If they did, no one would choose them, because the truth is not the stuff of electoral victories – not even in AfD.

In the end, modern social systems fail. There is no alternative to so-called democracy, but what can we expect from the future if our own system destroys us?

Of course, you can tell yourself that it has to get better at some point – after all, every crisis ends with the light at the end of the tunnel. Even World War II ended at some point. That is how it will be with this crisis, and this time too, neither the world nor humanity will end, but the question is: what remains of Europe? That’s why you should emigrate and bring your money to Panama as long as you can, because only those who adapt can survive.

Whether tulip bulbs, dotcom, bitcoin or pension…
… all bubbles are made in order to keep as many
To do as much damage to people as possible!