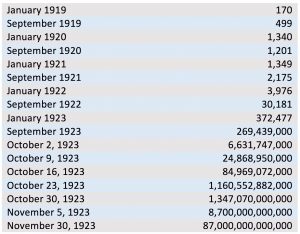 Price for one ounce of Gold in Marks.

After the defeat of the German Empire in World War I, shortages were rampant all throughout the country. Food deprivation was especially severe in the cities. Either the shelves in the stores were empty, or the goods that were available were extremely expensive. Factories went out of business and large parts of the population were unemployed. For that reason, many city dwellers went up-country by train to buy food from the farmers. As basic commodities became increasingly expensive, and food increasingly scarce as the winter approached, relations between the village people and city dwellers rapidly degenerated and, eventually, the dispute escalated.

By the middle of October 1923, a single sack of potatoes cost one billion marks, whereas only a few days later, the price was 100 times higher. At the peak of the hyperinflation, and a few weeks before the introduction of a new currency, the majority of the population could not pay such prices. Consequently, towards the end of the month, the city dwellers simply seized the goods from the farmers, without paying anything. They brought horse carts to steal potatoes, among other items, in large quantities. Local police were powerless, since requests for reinforcements were rejected. Likewise, the English and the French occupation forces in Cologne decided it was not their duty to assist. 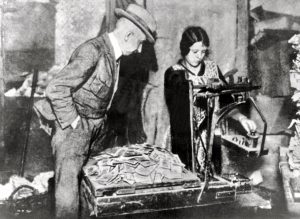 People resorted to weighing money rather than counting it.

As a result of these events, farmers armed themselves for their own protection. On the morning of October 26th, 1923 a big number of angry farmers arrived at the train station with pitchforks and clubs, awaiting the train from Cologne, which was crammed with hungry people from the city who were determined to seize food by force.

The City dwellers broke through the farmers’ makeshift barricades as the train station was entirely besieged. Bottles and stones were thrown and the farmers were quickly overrun by the city dwellers. In panic, one of the farmers fired into the crowd. One city dweller was instantly killed and a second died in hospital later that day. The perpetrator was beaten to death by the towns people and his body was mutilated beyond recognition. After that, the “visitors” returned to Cologne.

It was quiet the following day, but two days later, driven by hunger, the looters from Cologne returned to Overath. Equipped with pickaxes and carts they cut across the fields and invaded the farmhouses and stables, stealing everything edible they could find or dig up. The farmers, outnumbered by the looters, and therefore unable to protect their property, had no choice but to stand back in frustration.

Back at the station, the majority of the loot was sold to dealers of stolen goods who took things back to the city to resell them. In response to that raid, the farmers arranged a 1,500-man village militia that took positions along the access roads to the village. Supported by miners, whom were in fear of losing their potato supply, farmers had the railway station blocked. In early November 1923 the train service from Cologne to Overath was suspended and the city dwellers had to search for food elsewhere. These events of 1923 went down in history as “The Potato War”.

By some miracle, “only” three people died back then in Overath, though tendencies to resort to violence were relatively limited during the time. Not to mention that the inter-societal ethnic and religious hostilities of the population were almost non-existent in comparison with those of today.

Fast forwarding to the present: Only one seventh of the world’s population could be fed with food which is organically produced. In other words: only about one out of seven of today’s world population can be fed without synthetic fertilizers, synthetic pesticides, and GMOs, meaning six out of seven people would be forced to starve in the case that these items were no longer available.

The so-called “Potato-War” of October 1923 in Germany illustrates a very possible reality of what may possibly happen in the not-so-distant future – in many places – though with the addition of a much higher rate of violence.