The intention of the Burden Sharing of 1952 was to provide compensation out of the so-called “Compensation Fund” to Germans who were adversely affected by the war. Citizens of Western Germany who did not lose their properties in the war were obliged to pay a special levy, amounting to 50% of their calculated assets, into this fund. Mostly, real estate was concerned, as it represented the major part of the national wealth. The special levy could be paid over a period of 30 years. Together with the interest, the payments into the compensation fund were approximately the same as the original value of calculated assets. In other words: Those who had to pay this special levy had to pay for their property a second time.

Actually, the price may have been even higher, taking into account that the process of repayment spanned over 30 years, and that inflation of currency was also, quite likely, taking place during this period. Regardless, merely acknowledging this possibility was of little consolation for people whose property was auctioned as a result of them being unable to pay the special levy. Thus, although their property may not have been destroyed by bombs and was not expropriated in Communist Eastern Germany, they still lost it, years after the war, due to the Burden Sharing Act. 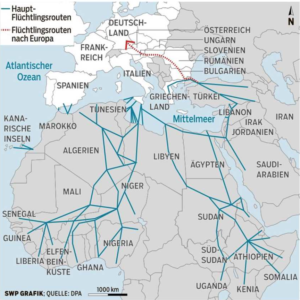 Refugee routes from Africa to Europe.

This event, which has been almost entirely forgotten, by the elderly, six and a half decades later, and which is virtually unknown to recent generations, may very well be repeated with even greater severity, in the near future, as Burden Sharing Act 2.0. Today, almost all households are so indebted and concerned with servicing their “interest payments”, that the vast majority of the population simply does not have the reserves to pay such a special levy.

Thus, the question arises as to what will happen to millions of properties if their residents are unable to pay the special levy. Furthermore, the question arises as to why the general interest in this topic is so small, since the plans for Burden Sharing 2.0 are probably already set. Then again, who should be surprised by this ignorance when hardly anyone remembers what happened in Cyprus in 2013? There was no internet in the 50s, but the people obviously had more interest in the events of their time. Even years before the introduction of the Burden Sharing Act of 1952, there was a public debate about the introduction of such a law, and the vast majority of those who had remained in the Western Germany had a decent understanding as to why they may have to pay such a special levy. After all, they felt a collective guilt over the war, as well as an obligation to their fellow countrymen in the East. 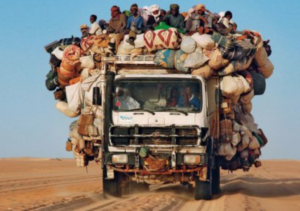 It remains to be seen whether the population is prepared to accept a “Burden Sharing Act 2.0” in this modern age, as a future special levy will not be introduced to help German war victims. This time, the money is needed to continue to import the third world into Europe and to provide a pleasant life for non-Germans and non-persecuted unskilled workers, who are neither willing to assimilate nor work. Burden Sharing 2.0 is being introduced because banks have mutated into casinos over the last few decades, accumulating unprecedented losses, and it is being introduced to pay our parents’ and grandparents’ debts.

Regardless, it should not be a problem for a future government to introduce a new “burden-sharing act”, or whatever it may be called, as, after all, 85% of the voters continue to vote for the parties that are bringing about war and destruction. In order to prevent capital flight from occurring when such a law is introduced, increasingly restrictive measures have been taken over the years. Transfers abroad are likely to be much more complicated in the foreseeable future.

Can You Still Emigrate If An Encumbrance Has Been Placed On Your Property?