The Big Yellow One

Don’t worry! I’m not doing this. I like the big yellow one and the little Isuzu too much.

Becoming a pilot was at the top of my wish list during my childhood. If Starfighter at that time in the Palatinate occasionally covered the sun, the entrance in fighter planes at the airport in Ramstein was however very sobering at the day of the open door: the things stood there only, like somewhat bigger toys. The excavator driver around the corner, on the other hand, was my hero, as he operated a similar machine to mine today. If his excavator from the sixties had neither a closed cabin nor an air conditioning system, he moved a lot in contrast to the starfighters. I was allowed to ride along once in a while and that was great. I never thought I’d be an excavator driver myself. 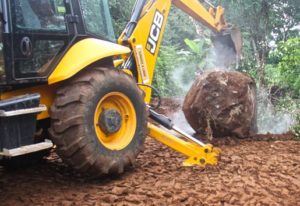 The excavator provides special help in laying water pipes, building roads, dams and houses. I enlarged the front shovel about half the volume. It’s not necessarily about transporting more volume, but before the magnification, it was a torture to fill the shovel. Especially larger stones were very difficult to pick up. It cost the monster nearly $80,000, but it’s worth every single cent. Apart from the fact that the excavator can replace at least ten workers depending on the job, there are many manual jobs that are virtually impossible. For example, the device can lift stones weighing up to two tons and very large blocks of up to five tons can be pulled or pushed.

The funerals must not be forgotten, however. I have buried hundreds of stones at Finca Bayano. A large stone easily occupies one square metre and since there is no planting in the immediate vicinity, the triple surface area quickly comes together. In addition, there are “stone fields”in which 50 or more stones lie side by side. Especially very large stones, which I cannot move with the excavator, have to be buried. I make a hole next to the stone, which is about 50 centimetres deeper than the stone. Afterwards I carefully dig a little soil under the stone, so that the stone only needs a little push to fall into the hole. Finally I pull the stone into the hole and cover it with earth.

Excavating is exciting and relaxing at the same time. From the outside it looks so simple, but there are situations that have it all: it’s very easy to lose control of the excavator, so that it tips over and may roll over. Often it happened that one of the rear wheels lifted up because I overloaded or loaded the device incorrectly.