The area in this map, around Finca Bayano, covers about 30 km² with a maximum of 500 people living here. 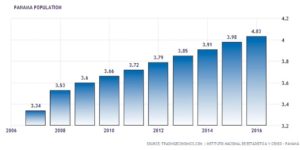 The population growth in Panama is around two percent.

Once I made the decision that Panama would be my country of emigration, I set about searching for the most suitable land to start the Finca Bayano project. After driving thousands of kilometers through Panama, I eventually found the land that fits all of the needs.

One of the most important preconditions was that the surrounding region is very sparsely populated, as in the case of a crash, the chances of survival in a densely populated area are extremely low. After countless weeks I spent searching for just the right plot of land, in July 2010, I had found it: A farm in Garnadera de Las Palmas, located in the central province of Veraguas. Garnadera has 300 inhabitants and is located 330 kilometers West of Panama City, 80 kilometers West of Santiago, and 150 kilometers East of Davíd. On Google Earth, you can see that the area is very sparsely populated – Veraguas has a population density of less than ten people per square kilometer. The center of Finca Bayano is located at 8°06’07,55″N and 81°28’08,60″W. Our house, about 350 meters Southeast of the main entrance, has the coordinates 8°05’56,59″N and 81°28’29,38″W.

Panama is as big as Ireland and has about four million inhabitants, forty percent of whom are living in the conurbation of Panama City. Around 10% are living in smaller cities and half of the population lives in rural areas. The smaller cities of David, Santiago, Penenomé, Colón and Chepo cannot be compared with the capital in any way, so that Panama City is basically the country’s only big city.

Since Panama City neither sources its own drinking water nor produces its own food, it would be absolutely impossible to survive a crash in the city.

Thus, even without counting the extremely high risk of encountering violence in urban areas during the crash, it is already quite impractical to survive such an event in a city. Of course, the same holds true for all, or near all, other large cities across the world! If, in the face of a global collapse, the situation should worsen dramatically and to the extent that it would no longer be possible to supply Panama City with food and water from outside sources, and if the city’s inhabitants should lose their jobs and, in turn, their livelihoods, then the city dwellers would have no choice but to emigrate to the countryside in order to survive.

Due to the fact that Panama City has only developed over the last few decades, almost all city dwellers have relatives in the province. That’s not the case with two small groups of people. On the one hand, there are families who have lived in the city for several generations, and for that reason they have no relatives up-country. On the other hand there are a few thousand foreign workers, mostly from other Central American countries. Whether or not foreign workers, who will be destitute in the event of a crash, would leave Panama, cannot be foreseen today. City dwellers, without up-country relatives, would most probably try to find refuge in their friends’ homes outside the urban areas. Both groups should not be bigger than 100,000 people altogether.

In general, two completely different crash scenarios are possible. On the one hand, the so-called “Salami Crash” – a collapse that gradually unfolds, slice by slice, bit by bit: every week and every month things would be getting a little worse. And on the other hand there is the “crash from one day to the other” – the total collapse within a very short time.

As I mentioned above, about half of the Panamanian population lives in the city, and half in the countryside. To us, this is an extremely important fact. If my assumption comes true in that city-dwellers would be forced to leave their homes almost immediately after the crash, Panama City, from a purely mathematical perspective, might, in a worst-case scenario, be near completely abandoned. As a result of such a rapid migration, the countryside population would, almost instantaneously, double. In our village, for example, the number of inhabitants would increase from 300 to 600 people. In theory, this should not be a problem, as sufficient nutrition for that amount of people can be produced in our region.

In the case of a “Salami Crash”, people would leave the city at a gradual rate, migrating up-country. The increase in the countryside population would then be in correlation with the economic down turn of the city: People who would lose their jobs in the urban areas would have to leave, as the majority of the population possesses not even a month’s worth of savings to live on. These emigrating city dwellers, whom have grown accustomed to fast-food and air-conditioned cinemas, would then be forced to get used to working in the countryside. Most probably, they wouldn’t be very happy about their return to the village from the luxury of living in a modern city and hopefully, they won’t cause too many issues. Regardless, I think it is rather suitable to recite a quote that always seems to be true: “Failing To Prepare Is Preparing To Fail”. 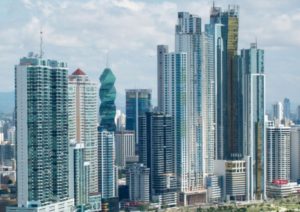 It’s an illusion to survive the crash in a city.

If there is a “crash from one day to the other”, the situation would be quite different, of course. Due to modern man’s lack of basic natural food storage, extreme stress and panic can be reasonably expected. As most people have next to no idea regarding the reality of the financial situation that we all find ourselves in, they are almost absolutely unprepared to deal with the consequences that will arise once this very system comes crashing down. This is especially true in the cities, where nearly the entire population is storing next to zero food, zero fuel, and zero tools. The absolute majority of people wouldn’t recognize the seriousness of the situation until the supermarkets are empty, credit cards worthless, sockets dead, and gas stations dry.

In such a scenario, the people with a bottle of Coke in the fridge and five liters of gas in the tank would suddenly think of their relatives up-country, to whom they’d sent 20 dollars as a Christmas present 10 years ago. They would like to call them, but that would no longer be an option with the cell towers out of service. They would also like to drive their car to meet them, but that would also not be an option, with a traffic jam preventing them from even backing out of the driveway.

Should there be such a quick crash, city dwellers would lose everything they own in the city. They’d lose their apartment, their car, and all of their household goods, all of which had been purchased with loans from the bank. They would have to leave everything behind for the looters. Those who would insist to stay and “defend” their property would most probably be killed by the hordes of thieves of opportunity which are bound to arise soon after such a crash takes place.

Eventually, two days after the last drop of water would fall out of the tap, and after realizing the seriousness of the situation, the instinct of the masses would tell them that this is no minor crisis, and that it is high time to go. So, they would leave their home, their car, and most all of their material possessions to walk to their relatives up-country: some people would have to cover hundreds of kilometers along the Panamerican Highway. Of course, they have never walked such a long distance in their lives, much less on the minimal amount of food and water they would be able to bring with them, if any. It goes without mentioning what little knowledge they would have of the direction to their target destination. Out in the street, they would be surrounded by people with exactly the same problems: Everyone would be leaving everything behind and no one would have anywhere to go. Everyone would be hungry, but no one would have food. Everyone would be thirsty, but there would be nothing to drink. Some would still have money, but there would be nothing to buy.

Meanwhile at Finca Bayano: bananas and other fruits may be harvested 24/7 and fresh water in sufficient quantities is coming from our spring.

It is impossible to say how many people would make it out of the city or how many would come to our village alive in the event of a “crash from one day to the other”. Many would even stay in the city solely to loot and possess for a very short time in their life what they never would have possessed under normal circumstances. Others wouldn’t be able to leave the city because of physical disabilities. For someone who is 50 kilos of overweight, it may be possible to walk down the stairs, but the first village outside of Panama City is not within walking distance for Mr and Mrs Obesity. Many would die of thirst along the road because without water you can’t make it much longer than two days in a tropical region.

The villages closest to the city will be, without a doubt, hit the hardest by these hungry, thirsty mobs. Chances are that very few will survive in these sorts of areas amidst such circumstances, as everyone will be desperately looking for something to eat or drink. Considering that the “Potato War” of 1923 in Overath, Germany, occurred during a time when people were far more well-behaved than today, one can only imagine what people would behave like in case of total absence of food and water. It is precisely for this reason that I’ve chosen to build Finca Bayano far away from large cities.

This theory of probabilities does not guarantee anything, because it’s simply impossible to determine for certain whether or not there will be a crash in the near future. Likewise, no one may predict with certainty how such a crash would unfold, be it a “Salami Crash” or a “crash from one day to the other”. Regardless, both the fact that the area surrounding Finca Bayano is sparsely populated, and that our home is located far away from any densely populated cities, are among the most important considerations in regards to the chances of survival in the case of a worldwide economic and systemic collapse.