In other articles on this site, I have already pointed out the advantages of Panamanians: they are friendly, good-natured, and they leave us alone. But they also have another characteristic: they are even more conservative than Western people. For that reason, it is pointless to talk to Panamanians about an upcoming crisis. They, too, have noticed that the best times are over, as today there is no longer an economic growth rate of 10%, but they could never imagine that a global collapse could occur.

Apart from Hollywood movies, modern Panamanians know very little of war. The only exception within relatively recent times was the invasion of the Americans in 1989, and that was almost 30 years ago. However, in the near future, I imagine that it should be possible to have productive discussions with people regarding the collapse of the system as we know it. I have already talked to some of my employees about this topic. After all, they’ve been working with me for years and know that I’m neither nutcase nor “conspiracy theorist”.

Garnadera is the neighboring village of Finca Bayano with quite a lot of “nothing”: There is no supermarket, no petrol station, no bank, no pharmacy, no workshop, no doctor. Also, there are no dealers no “rapefugees”, no chemtrails no criminal gangs, no industry and no fatal accidents on the road. And there is virtually no stress.

Although all 300 inhabitants of the village live in their own houses, complete with electricity and running water, they still live in a very modest way. It is estimated that the same number of family members live and work in Santiago and Panama City. This means that in the case of a crash, they will all have to come back to the village. Considering the area that is available for the cultivation of food, nutrition will be a non-issue, as most all the people of Garnadera have their own gardens, with chickens and other domestic animals. There are only ten cars in the village and about ten times as many free-roaming horses. According to Google Earth, the village square is located at 8°05’51.0N and 81°28’56.0W. The name of the village is misspelled at Google Earth. It should start with a G: Garnadera! 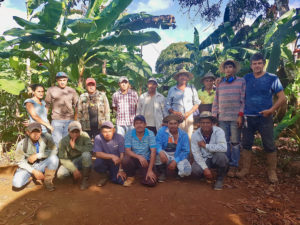 I am employing 15 workers at Finca Bayano, all of whom are from the village of Garnadera. They are half-way are self-sufficient with small gardens and a number of domestic animals and, most important, they live in their own houses, so they don’t have to pay rent. From the $300 that I am paying them monthly they can save half if they are not wasting money. People in Western Countries hardly can safe anything today. As soon as we are going to open organic shops, we will need three times as many empoyees, to work in the food production, harvest, transport and sale, so that considerably more money will flow into the village.

Chago is the open-air hairdresser in Garnadera. There are not many motives for a photo, he certainly makes one of them. Apart from Finca Bayano and the nature around us, there is not much else in the village to admire, and while Chago may not be a world-class hairdresser, it’s always fun to pay him a visit. For only a dollar, he does his best, and if his wife’s home, black coffee with sugar is included. Not to mention the ambience: There aren’t many places in the world where a horse will watch you get a haircut. Unless it’s raining, the cut is served on the patio. In contrast, a haircut in Panama City costs no less than ten dollars. 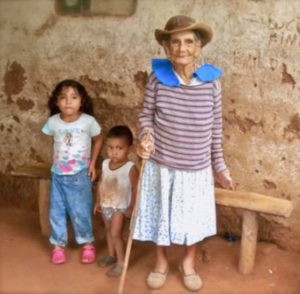 Grandmother Maria, who passed two years ago, was probably the last person more than 100 years old in the village. People who were born around 1910 had the best of all worlds: they were raised on natural food, subsequently grew no interest in fast food, and showed up right in time for modern medicine to allow them to live to a relatively very old age.

When Maria was sixty, she had her first doctor’s visit. At that time, air pollution was unheard of and she kept a diet strictly consisting of natural food. When Maria was in her seventies, destructive fast-food chains had just begun to arrive in Panama, but at that age she wasn’t interested to change her diet to burgers. At the age of 85, as a great-great-grandmother, Maria became sick for the first time, however, modern medicine extended her life by another two decades.

In the photo she is seen with two of her great-great-great-grand children. She told us that she didn’t remember how many descendants she had, since she, herself, had ten children, and that she was succeeded, before the time of her death, by four generations, meaning that the number of her descendants would likely be around 200. 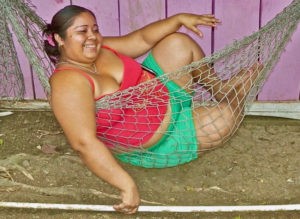 Anna is quite the opposite of Grandma Maria. She weighs about twice as much and she will therefore have many more problems with her health. Anna won’t have the best of all the worlds, nor will she live to be 107, but she is a very good example of how virtually no one in Panama is starving. Quite the opposite is the case: far too many people are suffering from obesity.

Apart from the wrong eating habits, the abundant surplus of food is the main cause of this. Rice, in particular, is very popular in Panama. However, it has several disadvantages compared to Yuca. Rice tastes better and you can eat more of it, but it has three times more calories than Yuca. In addition, rice farmers can only be competitive when they use a great deal of chemicals in order to maximize their yield. The downside of this is that these chemicals, among other health consequences, considerably increase the risk of cancer. 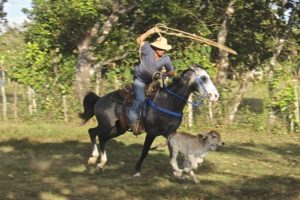 No festival in Garnadera is complete without its very own lasso-throwing contest. Since adult cows can be very difficult to control by a solo rider, and because the sole purpose of these events is entertainment, small calves are the subjects. Besides, with the amount of alcohol present in the veins of these riders, trying to catch a mature cow is not only difficult, but dangerous. Nevertheless, there is no shortage of true lasso-throwing specialists residing in Panama, and competitions are quite frequent.

There are many such competitions everywhere in which a wide array of cowboys showcase their “tuned” horses and throwing skills. As there are no cinemas or shopping malls in the countryside, such events are quite popular. Although some animal lovers may find this cruel, it should be noted that both the cows and horses are treated quite well, as no one wants to lose an animal.

In Garnadera, more than 100 horses roam freely on public land and pastures, as most of the fenced-in pasture is reserved for cows. It must be said, however, that those animals aren’t really valuable, in the sense that they cannot used for special purposes such as lasso throwing or any other practical uses. Also, they’re very small, and thus, have a very low weight limit.

Moreover, the market value for these horses is only around $300 max. First class horses, which would never be left roaming on public land, easily go for about five times as much. In the dry season, they eat all the cashews falling from the trees to quench their thirst. While this keeps the owners from having to feed their horses, it does come with the disadvantage of requiring said owners to spend some time finding their horses!

A mango tree was felled because its roots came too close to the foundations of a house. Cutting down a tree is about a day’s work for two people. As a rule, the workers are paid in a share of the wood which they’ve cut. Normally, the owner of the chainsaw cuts the tree and takes the trunk. From this trunk he then makes boards that sell for around $100. Once everything is cut into small pieces, we pick up the leaves and branches and take to Finca Bayano to be used as mulch. Mango wood, with its soft texture, only takes about a year to decompose. 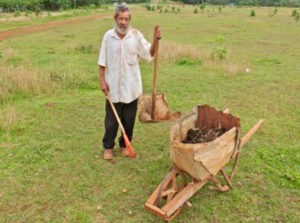 On the photo, there is a nneighbor who may be seen, from time to time, cleaning the village square with his trusty wheelbarrow.

When we started to collect horse manure, a few years ago, we found many of the village people laughing at us. Although we no longer do this, many people have, in the meantime, come to realize the value of organic crops, and that by being reckless with nature, they, at the same time, destroy themselves. As far as fertilizing the Finca Bayano is concerned, planting reeds and false sunflowers is preferable to collecting horse manure.

Oranges and mandarins ripen at the beginning of the year. By then, the large bulk of the fruits can be found rotting on the ground, under the trees. While many Panamanians opt for tearing open the easy-to-open plastic wrapping of candies and sweets over the skin of an orange, grapes and apples from Chile or California are beginning to gain popularity as “exotic” fruits. Regardless, this superabundance of fruit is something to be appreciated. Once “SHTF”, no more fruits will rot on the ground, but there will always be something to eat.

This hut is paid for and earthquake-proof. Although it would burn quickly, the structure only takes a few days to build. That being said, the blue plastic foil used to seal the roof ridge isn’t quite unfitting. The builders of bygone days certainly had better solutions for this. Nowadays, only poor Panamanians use natural building materials. Future generations may have to reemploy techniques of this kind if modern materials are no longer available.

As nice as it looks, it must be mentioned that this kind of structure has at least two major disadvantages. Firstly, the structure can be considerably difficult to keep clean, as well as insect and pest-free. The second problem is security. Since we are preparing for difficult times, it follows logically that we should build houses with sound security.

Garnadera: There is a lot of “nothing”here! …and Finca Bayano.