For about 20 years I have assumed that the system we live in will collapse. On the one hand because of the immense debt, but of course also because of the overpopulation and pollution of the planet. I left Germany in 2010 and am sure that I made a very good decision.

If you want to emigrate, you’ve come to the right place on this page, because Panama is still the best alternative. Surviving the further course of an ever escalating crisis in Europe will not be possible for most people. No doubt adjusting to the future will also be a challenge in Panama, but neither are there millions of refugees here, nor is there a Ukraine around the corner. The sparsely populated country offers excellent conditions for growing food in an almost perfect climate. As an aside, foreigners with a valid residency permit are allowed to own guns in Panama and carry them concealed. Furthermore, foreigners residing in Panama do not have to pay taxes on profits made abroad; this applies in particular to IT.

Until August 2021, it was relatively cheap and easy to obtain a residence permit. At a cost of about $7,000, applicants received a temporary residence permit after about a week, and after six months, the permanent one was usually issued.

The good news is that the requirements for retirees and pensioners (Jubilado Pensionado Visa) have practically not changed. You only need to prove a lifetime pension of at least USD $1,000 or USD $1,250 for a married couple per month. This pension can be obtained from either a government or private institution. There is also no legal maximum or minimum age for the pensioner visa. In addition, there are fees for the lawyer and other expenses. In total, it should not cost more than approximately USD $5,000.

The tightened rules: Today, to apply for a “normal” residence permit (Friendly Nations visa, with the possibility of applying for a work permit) USD $200,000 must be invested: Applicants receive a temporary residence permit with the purchase of a property, and only after two years have passed and it has been verified that the property is still registered in the applicant’s name is the final residence permit issued.

We can discuss everything else personally.

Area of ​​paths and stream: 4.2 hectares 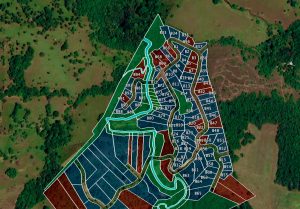 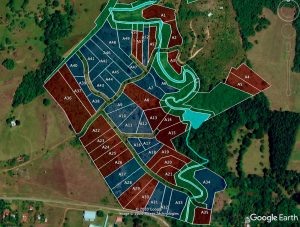 Agricultural plots can be shared by several parties. If you are thinking of keeping large animals such as horses or cows, you need agricultural land. With optimal management and irrigation, five large animals can find space on one hectare.

The main entrance is between lots A22 and A36.

Land by the creek 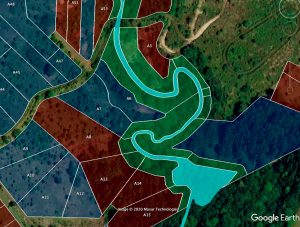 Both agricultural land and building land located on the creek have a creek bank that is at least ten meters wide and runs parallel to the creek. It is marked green on the map and consists of two zones:

The zone at a distance of three meters parallel to the creek bed is considered a protection zone and is part of the creek.

The zone at a distance of three to ten meters parallel to the stream bed is also considered a protection zone. Trees can be planted here.

The creek bank belongs to the respective agricltural or building plot and can be used to a limited extent, but it cannot be purchased, since areas on the waterfront in Panama are state property. Water can be taken from the stream, but a minimum must flow on to other fincas.

It is not allowed to build on the bank of the stream and no trees may be felled. Dams can be built with an exemption from the Environmental Protection Agency “Mi Ambiente”.

The coordinates of Finca Bayano are 8°06′N and 81°20′W. As you can clearly see on Google Earth, the area is very sparsely populated. I have pointed out several times on this website that the sparse population is a very important criterion for our project. In densely populated areas it will hardly be possible to survive in the event of a crisis.

To the west of Finca Bayano is the village of Garnadera with 500 inhabitants; apart from “pure nature” there is nothing here. There are a few shops and a bank in Las Palmas, seven kilometers away. Pharmacies, petrol stations and a hospital are in Soná, 40 kilometers away. Everything else is in Santiago, 80 kilometers away. A drive there takes about 90 minutes. It is 330 kilometers to Panama City. The journey takes five hours by car or seven hours by bus.

The location of Finca Bayano

It really wasn’t easy to find land to found Finca Bayano. I am often asked how I got here. I always reply that I traveled thousands of kilometers in Panama and found the best conditions in Garnadera de Las Palmas, in the Veraguas region: the climate is very pleasant, there is enough water, the region is very sparsely populated, the local one Population is very friendly and there is almost no pollution. Finally, it’s not too far from the Pacific, while Panama City and the borders are a reasonable distance away.

Not an object of speculation

The Finca Bayano is a “survival insurance”. If there is a crash and one day we have to live exclusively on our own products, this investment is invaluable. However, the Finca Bayano is not suitable as a speculative property, since an increase in the value of the land – beyond the costs incurred – is not to be expected.

Houses can be built on both building plots and agricultural plots. Building a house on a plot within the village has the advantage of living in close proximity to other villagers. Finally, we are preparing for a time when protecting the village community may be important. Today the area around Finca Bayano is very safe, but it cannot be ruled out that future events in other parts of the world will also have a negative impact on our region. Therefore, the best solution is to buy a building plot for building a house, and agricultural land for food production.