Our house was built in 1992 by members of the Catholic Church and served as a boarding school for girls for 21 years. As it was no longer in use as of 2013, I contacted the church administration in January 2015 for the first time, and asked them whether they were interested in selling the building. It was not easy to convince them that the house would be in good hands with us, since we are not Christians. However, as no one else was interested in buying it, the purchase contract was finally concluded in April 2015, for a price of $100,000. The living space of about 350 square meters – or roughly 4,000 square feet – is divided into seven rooms, with three bathrooms and a kitchen. One room serves as a workshop, we are using three rooms ourselves, and three guest rooms are available for our visitors.

For the past years, I have been primarily concerned with the technology of the house. The body of the building is very good, but there were an infinite number of details that needed to be improved. I have also laid out the large garden on a purely biological basis. Since November 2018, I have been renovating the whole house. Major works, such as laying pipes and cables, have already been completed.

First and foremost, I bought the house to give future residents of Finca Bayano the opportunity to live here temporarily until they have their house built at Finca Bayano.

As soon as I have finished building my own home for my small family at Finca Bayano, the house can be divided into several apartments. There is ample space for about five parties to live at the house. Panamanian building regulations are very uncomplicated and the garden, with its 5,000 square meters, is large enough to produce food for ten people.

Sporadically, we receive visitors who are interested in buying land and eventually moving to Finca Bayano. Our house is not a hotel, but we do our best. Ultimately, our housekeeper is able to prepare an “international breakfast”, but she can cook Panameño all the better, so that our visitors can also get an impression of the Panamanian cuisine. Those who have already bought land at Finca Bayano may stay in our house for 15 dollars a day, all inclusive. Visitors who have not yet bought land pay 50 dollars per day. Those who decide to buy land after the visit can deduct the cost of accommodation in our house from the price of the land. 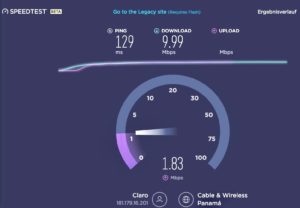 There is a relatively fast internet connection available, which is sufficient to make Skype calls and watch low resolution videos. With a ping time of 129, a download speed of 10 Mbps, and an uploading speed of almost 2 Mbps, our Internet can be considered reasonably fast, considering that we are in the deepest pampa. In Santiago, the speed is only half as fast – most probably because too many people are using the internet there. Unfortunately, there is no flat rate in Panama, so Internet is one of the things that are more costly here than in Europe or North America.

There is a hot shower, and the drinking water is unpolluted. Given the low level of traffic, air pollution is almost unheard of. In the majority of households in the neighborhood, gas is used for cooking and waste is hardly burned anymore, as it is forbidden.

Insects are not a problem worth mentioning. Though, due to the fact that we live in a climate of eternal summer and that there is no pharmacy in a distance of 40 kilometers, it is advised that you bring insect repellent with you in your suitcase. Likewise, snakes are non-issue. They stay out of our garden because of our dogs, since these reptiles require a habitation of absolute rest. Somewhere else, they are lying in the grass waiting for their meal to arrive, but there is no room for snakes where curious dogs run around. The same applies to large spiders. This leaves concern only for scorpions, who sometimes make it into the house. However, species found in our area are not very dangerous; their sting is roughly the same as that of a wasp.

If would like to explore Finca Bayano off the beaten track, you should bring a pair of boots, because there, snakes may be hidden in the grass. Although we have had no bites so far, less disturbed regions are naturally more prone to be home to such creatures. There is little to be concerned about in this regard as long as you move in areas where the grass is cut short, or in fields which are being cultivated. Snakes may only survive in tall grass, as they need to hide. They only move during the mating season, during hunting, or when they are on the run. Once Finca Bayano is being completely cultivated, there will be no more snakes, due to the ample number of dogs and chickens scaring them off. None of our visitors has ever come across a snake, but as we all know, “An ounce of prevention is worth an ounce of cure”. Rubber boots, in almost all sizes, are available on site.

During the rainy season, also known as “winter” by the Panameños, which occurs between May and December, the average temperature is about 25°C, or 77°F. Rarely does the temperature rise above 30°C, or 86°F. It is mostly cloudy, which has a very nice effect on white skin. Sunscreen, most of which is also toxic, is rarely necessary during these eight months.

During the dry season – from January to April, the so-called “summer” – it’s a bit warmer. The temperature of this period is comparable to the Northern midsummers, but temperatures of 40°C, or 100°F, are never reached. Due to Finca Bayano’s close proximity to the equator, day and night are of almost equal length throughout the year. The sun rises around 630 AM, and sets 12 hours later. After sunset, the so-called “ideal temperature” prevails during this time. I hope to be able to finish our natural pond by the end of the dry season, in April 2018, so that we will be able to cool down in the water.

Since there is hardly anything to buy in the village of Garnadera, we do all our shopping outside of the village. Las Palmas is seven kilometers away and has about 1,500 inhabitants. There are two supermarkets where you can buy most important things, and a small, simple restaurant. A bank will be opened in 2018 and a gas station is currently under construction. The closest small town is Soná, at a distance of 43 kilometers. In addition to a hotel, there are several pharmacies and hardware stores, two banks, and two petrol stations. Soná has about 5,000 inhabitants. Santiago, the capital of the province of Veraguas, is the most suitable place for shopping. The city is 85 kilometers away – going there by car takes about 90 minutes. There, there are a large number of shops and almost all of the authorities. We rarely travel to Panama City.