Even if we assume that Panama will not be hit too hard by the crash, there is still the possibility that power supply bottlenecks will occur after a breakdown. Furthermore, it is precisely tropical regions in which solar systems function particularly effectively, but they cannot compete with the public electricity grid. A kilowatt hour there costs only 12 cents. In particular, irrigation – during the dry months from early January to late April – requires large amounts of electricity. And even if there is hardly any cloud in the sky during this time, solar energy – at least temporarily – is not an alternative, because it is by far the most expensive solution. 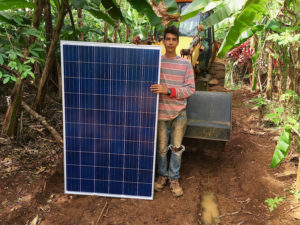 We already have 35 solar panels at our disposal, which cost $8,000 – but they will probably not be connected until 2020. Unfortunately, they are only the smallest part of the plant and represent about one tenth of the total investment volume. On the one hand, an inverter is needed, which costs about $5,000 for this number of panels – and because the entire system is worthless if this device fails, a second inverter should be available. On the other hand, the solar panels must be fastened. The roof of a building, which in our case must have a surface area of at least 100 square metres, is the best suited for this purpose. While building prices in Panama are also very reasonable at 600 dollars per square meter, it costs about 50,000 dollars to build a building with an area of about 80 square meters and a slightly larger roof. In addition, there are the fortifications, which add up to 5,000 dollars, and a battery bank, which is located in the upper four-digit range. In view of this high investment, the solar system is postponed for the time being, but not cancelled. 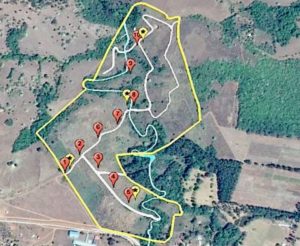 The connection to the public electricity supply is planned for the first half of 2018 and will be the largest project in addition to the construction of the dams. Cost-effective irrigation is only possible with electricity from the public grid. Water pumps that run on diesel or petrol are much more expensive to buy and cost many times as much to maintain. For the time being, five of the ten poles marked in red on the map are placed. In order to transform the high voltage of 19,000 volts to two phases of 110 volts, two of the four transformers marked in yellow will be installed for the time being. The masts are made of concrete and have a height of 7 meters. A pole costs 350 US$, the transformers cost 3,500 US$ each and the cables cost 5,000 US$. The total cost is approximately US$ 30,000. By 2020 it will probably be possible to supply half of the Bayano estate with electricity. At the moment we are checking whether underground cables can be laid, because electricity pylons are anything but beautiful.

Again and again I am asked if I make use of “free energy”. I’d love to, but so far no one has told me how to do that. Wind generators cannot work effectively at Finca Bayano. There is usually a slight breeze, but there is not enough wind to justify the construction of wind generators. 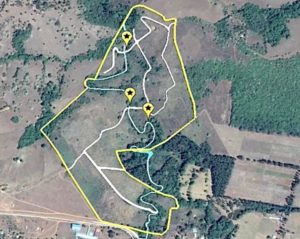 Initially, three dams are planned, which are marked in yellow on the map. Behind the dams, reservoirs with a volume of about 1,000 cubic metres of water are created, which are used for fish farming and for irrigation during the dry season. At the same time, the dams serve as a passageway. Hydropower is used to drive small water pumps (Aries). Construction of the first dam will start in January 2018 and I will document the works in detail with videos. The creek can be dammed ten times on its course of 1,500 meters over the Finca Bayano. I have already obtained permission to do so.

The building plots of Finca Bayano are supplied by the well on the plot B38. The southern half of the finca receives water from the stream.

You are only prepared if you prepare yourself where you have the prospect of surviving a crash!