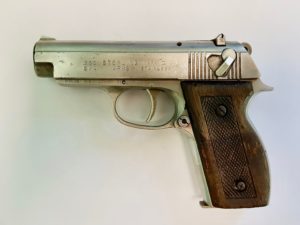 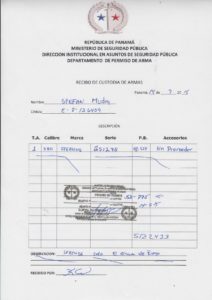 On September 14, 2015 I bought a Sterling pistol from my lawyer and applied for a permission to carry the weapon. On March 7, 2018 – two and a half years later – I received this permission. Usually it takes one to two years, but since I am a foreigner, the application was probably a bit more complicated. In general, it is certainly a good sign that we as immigrants enjoy the same rights as Panamanians in this respect.

The Sterling pistol was built between 1980 and 1984 and is not in a good condition. $500 was still a very good price, as used weapons cost several times more than new ones in Panama, because neither weapons nor spare parts are allowed to be imported since 2010. For this reason, it is advisable to purchase several used units of the best-selling revolvers in the near future in order to have spare parts at our disposal in case the need arises. Smith & Wesson or Taurus models are suitable for this purpose. Revolvers should be preferred to pistols because of the simpler technique.

A few years ago, I thought it was neither appropriate nor necessary to arm ourselves in Panama. When asked, I always replied that there are not going to be any weapons at Finca Bayano. I changed that opinion. First I bought a Barnett crossbow, which is the best in the market, in my opinion, and in 2015 I decided to buy handguns. Of course, it’s not about “shooting our way out”, but it can’t hurt to be able to defend ourselves in the event of a case. After all, we do not know what is coming and if the future will be as negative as many people fear, it may be better to have one or several weapons.

The license to carry the gun has a very unwieldy format of about 28 by eight centimetres. That’s because there is room on the back of the card to register up to 20 weapons.

As part of the application, I had to get a psychiatric report in 2015, which cost $150. The psychiatrist asked me at that time whether I had felt the need to kill myself or other people. Otherwise, he only asked me questions about the European culture and eventually we also talked about the collapse of the system. It is interesting to note that educated people in Panama are also concerned about this problem.

Apart from the psychiatric report, I needed a Panamanian police certificate of conduct, a confirmation of the residence permit in Panama and I had to prove, by means of a urine test, that I had not used any drugs. After the purchase contract was made, the gun and all necessary documents had to be handed over to the Ministry of Security in the DIASP (Dirección Institucional de Asuntos de Seguridad Pública) department and I was informed that the pistol and permission to carry it would be handed over to me after about eight months. I knew it could take a little longer, however, I would not have expected a waiting period of two and a half years.

To apply for a permit to carry weapons, the following documents must be submitted: 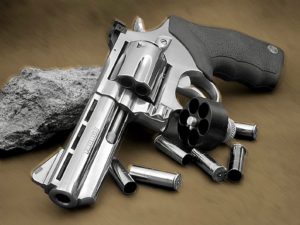 After all, I am not happy to have bought a pistol. A revolver would have been the better solution, but unfortunately I was badly informed by my lawyer. He told me that the permission to carry the weapon was also valid for other small arms.

So, I was thinking of buying more weapons as soon as I would get the permission, however, that’s not possible. A permission is granted only for weapons listed in the permit. Since I had only applied for a permit for the Sterling pistol, this is the only weapon which has been registered in my permit. Soon, I will buy two revolvers and have them registered, too. If only one weapon is registered and lost, a new licence must be applied for, which entails a waiting period of several months. 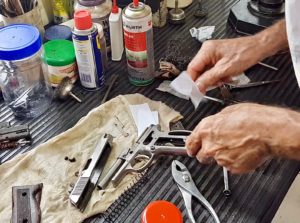 Since I am not yet familiar with weapons, I asked for the address of an expert who took the gun apart and cleaned it.

Owning a gun alone does not bring security. It must be stored correctly and still be easily accessible. Anyone who decides to buy a weapon should not only be able to handle it, but should also be prepared to use it if necessary. That may be an unpleasant thought, but it needs to be considered. Whoever owns and carries a weapon must also be aware of the responsibility that arises from doing so. On the one hand, a kitchen knife can be used as a murder weapon or – if they are strong enough – a pair of hands may kill. Even machetes were used often enough when it came to cutting up others, but a firearm is generally considered more dangerous. This is probably due to the perception that relatively little effort can cause a relatively large damage from a safe distance. 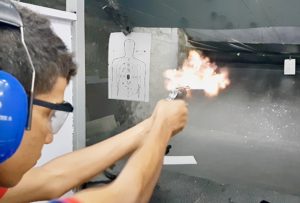 The photo on the left shows Marlon in a shooting range in Panama City.

Using the weapon for training purposes is only allowed on shooting ranges. Since the closest shooting range in David is 150 km away from us, I will check under which conditions it is possible to build a shooting range at Finca Bayano. Otherwise, it should be noted that 500 rounds of ammunition can be purchased per month and that the gun must be concealed when it is carried.

Having a gun when it’s needed is better than hoping to never need it.