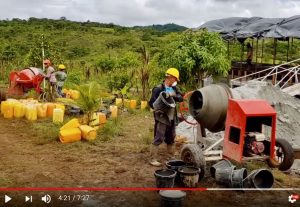 March 2019: The fifth video concerning the construction of our first house is exclusively about the casting of the ceiling. A little more than seven minutes show how we met this challenge in a well organized way. The only problem was the temporary heavy rain and, like it’s often the case, on that particular day, the precipitation was really heavy. Even the wind was a bit stronger than usual. Marlon’s ramp contributed very much to the fact that 25,000 kilos of concrete could be transported by wheelbarrow in a safe and problem-free manner; because of his extra-long smooth bar, the surface became next to perfect and eventually it was only possible to cast the ceiling with Marlon’s roof. 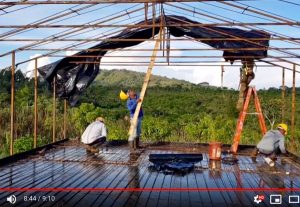 January 2019: The fourth video is occasionally not loaded and played straight away at YouTube. If this should be the case, just click on “refresh”. This short film is about the window and door lintels, the preparation of the ceiling moulds, the laying of more than 2,000 meters of reinforcement bars as well as the covering of the whole house with plastic sheets over a special roof construction and the exterior insulation. Besides, it is about a special transport, which shows that improvisation is a very important thing and that – especially concerning the roads – there is still a lot to do at Finca Bayano. But it also shows what we have achieved during the last years: Finca Bayano could hardly be greener.