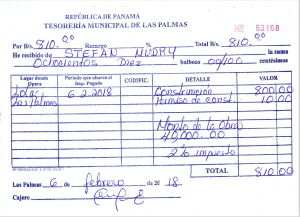 Here’s is the latest video about the construction of the first house at Finca Bayano. 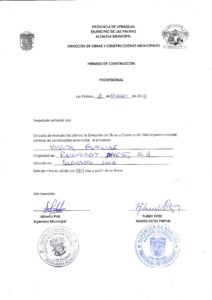 Eventually we’ve got it: The first building permit – it was granted on 6 February 2018. Building the first house is a huge step forward for Finca Bayano.

Obtaining a building permit is very easy in Panama because it is issued by the local administration at the mayor’s office. Basically, a hand-made drawing is sufficient and if it is not a building with several floors, no static calculation is necessary.

Over the next few months I will keep you informed regularly and in detail about the progress of the construction progress. A second building is scheduled for April 2018. By the end of the year at the latest, the first house should be ready and from 2019 the first people are going to live at Finca Bayano.

In the tropical climate of Panama, a large part of life takes place outdoors. It is therefore desirable to have a large terrace or veranda, which should normally have a roof. During the rainy season it is pleasant to sit dry and during the dry season you like to have shade.

In view of the fact that the veranda in the present design represents a quarter of the total area, this requirement has been met. In addition, a terrace can be added in front of the main entrance. When roofed, it contributes to the enlargement of the veranda on the upper floor.

It was also important to me to keep the walking area inside the house as small as possible. There is only a small staircase, which occupies 3.5 square metres and a mini corridor of one square metre, that puts the access of the toilet somewhat backwards and at the same time serves as access to the kitchen.

This view shows the ground floor. The living room covers about half of the area, the small room on the left is ten square metres in size. The space under the stairs is suitable for storing small objects.

There is still no house at Finca Bayano and nobody is living there, but we are going to build the first house in March 2018. I assume that Finca Bayano will make a big leap forward with the realisation of this project. The building permit has been applied for and will be issued around 15 February.

From this angle the kitchen and the toilet can be seen better. The small kitchen is sufficient for a small family.

In addition to the terrace, only one small bedroom and a small toilet are planned on the upper floor.

On this plan, the terrace has a view eastwards to the sunrise. The majority of the houses will have a view to the northwest. In the west you often can see a beautiful sunset and in the north the view into the valley and the mountains near the Atlantic ocean behind it is fantastic.

On this plan the whole house is covered with a roof. Of course, it is also possible to cover only the living area and leave the veranda uncovered.

The walls are transparent in order to have the most direct view inside this model. Making the roof transparent was not possible with this free program. With the next house, we will get a better one.

Because the building regulations in Panama – especially in the countryside – are very loose, this plan can be changed at any time. In essence, the size should be respected and if it is not more than two floors, no questions will be asked. A plan does not have to be made by an architect and there is no control at the building site.

Two persons should have enough space in this house.

The special feature of the upper floor is the large veranda. Especially in the case of the higher situated plots, the view from here is even better and the breeze even more pleasant.

There is the possibility to build an oven with a fireplace for barbecue on the terrace. Even for a table tennis table, the surface would be sufficient.