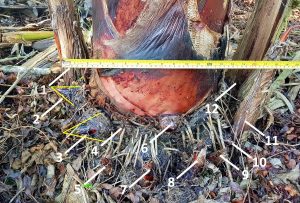 The photo on the right shows clearly how strong plants can become in organic cultivation: This mother plant has not yet fully grown but it already has 20 root sprouts. I numbered 12 of them on the photo, on the other side there are another eight. Two of the sprouts are marked with yellow lines because they are hardly visible on the photo. More root sprouts are likely to appear around the mother plant, so it might be producing 30 root sprouts all together. The stem has a diameter of about 30 centimetres, the plant is about eight metres high. Not only has it a red trunk, the plant also bears red bananas. Click on the picture to enlarge it. 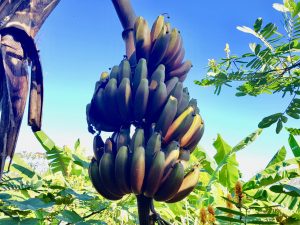 Most of the cooking bananas, or plaintains, are green and are usually they are cooked unripe. Red bananas are an exception. They are plantains, too, but in a very mature state they can be eaten as sweet bananas. Other plantains also get sweet when they continue to ripen, but they do not taste good when uncooked. All kinds of plantains have a very good taste when they are fried. Although frying has the disadvantage that some fat is added to the food, but it has the advantage that the fruit is cooked more gently. While the frying of small slices takes only two minutes, a banana has to spend about half an hour in the water to be cooked. 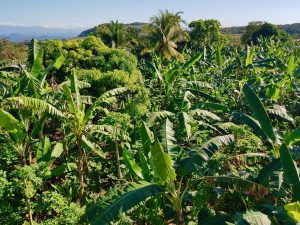 I have always imagined my tropical garden as seen in the photo on the right side: Bananas, mango trees, coconut palms, papayas and many others, that are green year round. This photo was taken from our water tank at a height of six meters. Clouds over the Atlantic Ocean can be seen in the distance.

Banana plants are the most important plants at Finca Bayano. On the one hand, they contribute enormously to the improvement of the soil and on the other hand, the  the fruits ripen year round – especially when they are irrigated during the dry season. However, they require a relatively high soil quality – they do not grow in mediocre soil. 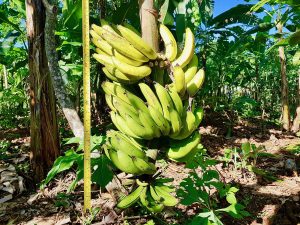 On the photo on the left you can see “classic” sweet bananas. The yield in our natural garden is only about half that of a plantation where chemicals are used, but our fruits taste at least twice as good and are much healthier. 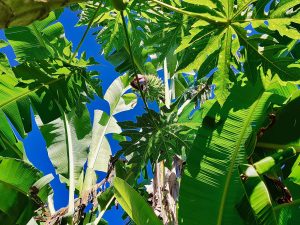 Banana plants produce a lot of shade with their large leaves and thus prevent the soil from drying out. During nights with high humidity, the leaves produce so much dew that it sounds as if it rains lightly when the dew falls to the ground. Furthermore, the remains of the plant are excellent for mulching after the fruits have been harvested. An adult plant can weigh up to 200 kilograms. As can be seen in the video, the fragmented trunk can be used to mulch an area of more than one square meter. The trunk, which consists almost of 100 percent of water, is cut into small pieces to decompose faster. 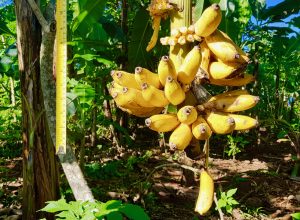 The photo on the left shows what happens if bananas are not harvested in time: some fruits have already fallen off and others have been eaten by insects and birds. Both, plantains and sweet bananas are usually harvested unripe. On the one hand, animals do not attack unripe fruits and on the other, unripe bananas are hard so they do not take any damage when they are harvested. The harder the fruits are, the better they may be stacked for transport.

Bananas taste better when they are organically produced and left to ripen in a natural way instead of being transported on ships for weeks. Apart from that, they make a very good juice: Put a banana in the blender, ad the same amount of water, switch on your mixer – ready! There is another possibility to process bananas, too: We can make flour! Since there is not much grain produced in Panama, there is the possibility to sell banana flour. Here you can find a short video from Sweden about banana flour production. 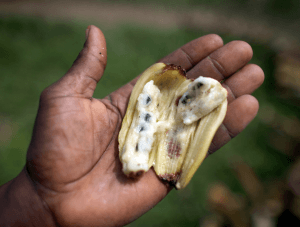 The photo on the right shows a natural banana with seeds. The future probably belongs to this species and not to the modern-day banana from the laboratory.

Normally there is a seed at the beginning of a plant life, however, bananas from the supermarket do not have seeds anymore. The small black dots found in modern-day bananas are just the remnants of seeds. Bananas with seeds, like in the photo on the right, do not fit into modern life. It is not known how long bananas have been reproduced by root sprouts, however, as a result of this kind of reproduction, all bananas nowadays are genetic clones as the root sprouts are identical copies of the mother plant. As a matter of fact, this type of reproduction makes it susceptible to diseases because the genes no longer mix. In natural reproduction, the female ovary is fertilised by male pollen mixing their genes. 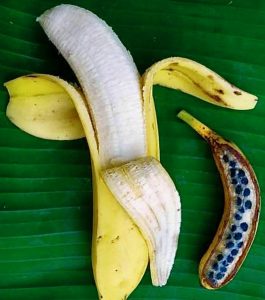 Our ancestors probably discovered the first sweet seed-less banana plants in the jungle 8,000 years ago, and continued to cultivate them. 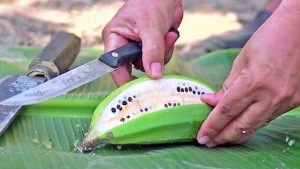 As far as the future of bananas is concerned, it is doubtful whether future generations are going to eat them. If you enter “banana”, “dying” and “Panama disease” in Google, you will receive the following information: The Panama disease was originally found in Southeast Asia. It was given its name in 1890, when it appeared throughout the plantations in Panama and Costa Rica, leading to enormous crop failures. It then spread through the seedling trade in Latin America and Africa. At the beginning of the 1960s, it was no longer possible to grow the banana variety “Gros Michel”, which by that time was the most important banana for export. 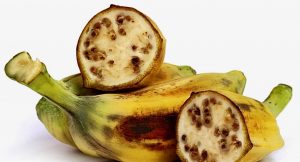 Banana producers responded by switching to “Cavendish bananas” that were resistant to Panama disease. In the 1990s, a new pathogen appeared in Taiwan that also affected Cavendish. Later, the pathogen was also found in other countries of East and Southeast Asia, from where it spread to Mozambique and the Middle East. In the event of a renewed attack on the plantations, high losses are feared for the global banana trade, which is almost exclusively based on Cavendish. Nowadays, however, in contrast to the 1960s, there is no alternative banana to Cavendish. Thus, it is possible that highly bred bananas will soon die out. 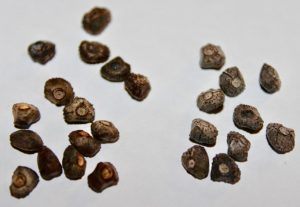 For this reason, at Finca Bayano we are currently conducting an experiment with natural bananas which have seeds about the size of lentils. The seeds can be seen in the photo. Such a banana would of course not find buyers today, because nobody wants to eat bananas and spit out seeds. However, if conventional bananas die out, we will have a strong set of cards in our hands with these fruits. The seeds are said take up to one year to sprout and the fruits should be resistant to modern diseases because they are natural.

Mozambique will probably be the first country in which modern-day bananas die out. Economical cultivation of bananas will soon not be possible anymore, because the production can only be ensured with extreme quantities of pesticides, which in the long run will make the production too expensive. What happens to the soil and the drinking water because of the use of chemicals is another topic.

Let us hope that our mixed cultures of bananas, yuca, pineapples and many other plants will be spared.

Here you find the publications of 2018.