Registration in the Land Register

The subdivision of the land at Finca Bayano into Building Plots and Farm Lands as well as the registration in the name of the buyers will be done in three steps.

The first step deals with the project design and the application for the devision of the land. A number of assessments were required for this. An environmental report had to prove that our project does not harm nature. There was no problem with that, since our project is now very well known and almost everyone at the authorities knows that we work in an environmentally friendly way. Also, the fact that we have planted about 20,000 trees since 2010 helped us a lot. In addition, a geological survey was carried out, which shows that houses can be built on the land at Finca Bayano. And finally, a traffic survey was needed to prove that there is a road nearby. The greatest effort, however, was the survey in connection with the compilation of a topographic map. In the newsletter of February 2018 (will be online from the end of January) there are aerial photos of Finca Bayano that were taken in connection with the survey in August 2017.

The second step starting in February 2019, deals with the application for the entire project and the design of building the houses. According to the plan this step should take a period of 15 weeks, but I think it will be possible to do it a bit faster.

Finally, the last step deals with the application and the approval of the plans and registering the properties in the land register.

Finca Bayano currently consists of ten lots of land, registered in the name of rainforest-invest S. A., Panamá. To view the entries, you can log in here, preferably with Google-Crome. 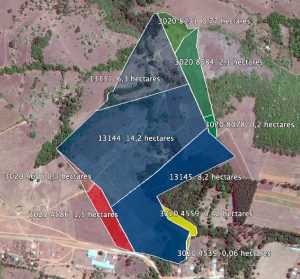 The subdivision of Finca Bayano and the registration of the Building Plots as well as the Farm Lands in the names of the buyers will take place in 2018. The main reason why the registration has not been finalized yet is the fact that the area of land which was purchased by rainforest-invest, in 2010, did not correspond to the fenced area. Apart from that, the authorities were working very slowly. In 2010, only the lots 13131,13144 and 13145 had titles. In January 2017 a further seven lots of land were titled, so the entire area of Finca Bayano is registered in the name of rainforest-invest.